The Secret Teachings of All Ages by Manly P. Hall

Copyright Status of the Secret Teachings of All Ages

For once, a book which really lives up to its title. Hall self-published this massive tome in 1928, consisting of about 200 legal-sized pages in 8 point type; it is literally his magnum opus. Each of the nearly 50 chapters is so dense with information that it is the equivalent of an entire short book. If you read this book in its entirety you will be in a good position to dive into subjects such as the Qabbala, Alchemy, Tarot, Ceremonial Magic, Neo-Platonic Philosophy, Mystery Religions, and the theory of Rosicrucianism and Freemasonry.

Title Page
Preface
Table of Contents
Introduction
The Ancient Mysteries and Secret Societies Which Have Influenced Mo...
The Ancient Mysteries and Secret Societies, Part Two
The Ancient Mysteries and Secret Societies, Part Three
Atlantis and the Gods of Antiquity
The Life and Teachings of Thoth Hermes Trismegistus
The Initiation of the Pyramid
Isis, the Virgin of the World
The Sun, A Universal Deity
The Zodiac and Its Signs
The Bembine Table of Isis
Wonders of Antiquity
The Life and Philosophy of Pythagoras
Pythagorean Mathematics
The Human Body in Symbolism
The Hiramic Legend
The Pythagorean Theory of Music and Color
Fishes, Insects, Animals, Reptiles and Birds (Part One)
Fishes, Insects, Animals, Reptiles and Birds (Part Two)
Flowers, Plants, Fruits, and Trees
Stones, Metals and Gems
Ceremonial Magic and Sorcery
The Elements and Their Inhabitants
Hermetic Pharmacology, Chemistry, and Therapeutics
The Qabbalah, the Secret Doctrine of Israel
Fundamentals of Qabbalistic Cosmogony
The Tree of the Sephiroth
Qabbalistic Keys to the Creation of Man
An Analysis of Tarot Cards
The Tabernacle in the Wilderness
The Fraternity of the Rose Cross
Rosicrucian Doctrines and Tenets
Fifteen Rosicrucian and Qabbalistic Diagrams
Alchemy and Its Exponents
The Theory and Practice of Alchemy: Part One
The Theory and Practice of Alchemy: Part Two
The Hermetic And Alchemical Figures of Claudius De Dominico Celenta...
The Chemical Marriage
Bacon, Shakspere, and the Rosicrucians
The Cryptogram as a factor in Symbolic Philosophy
Freemasonic Symbolism
Mystic Christianity
The Cross and the Crucifixion
The Mystery of the Apocalypse
The Faith of Islam
American Indian Symbolism
The Mysteries and Their Emissaries
Conclusion 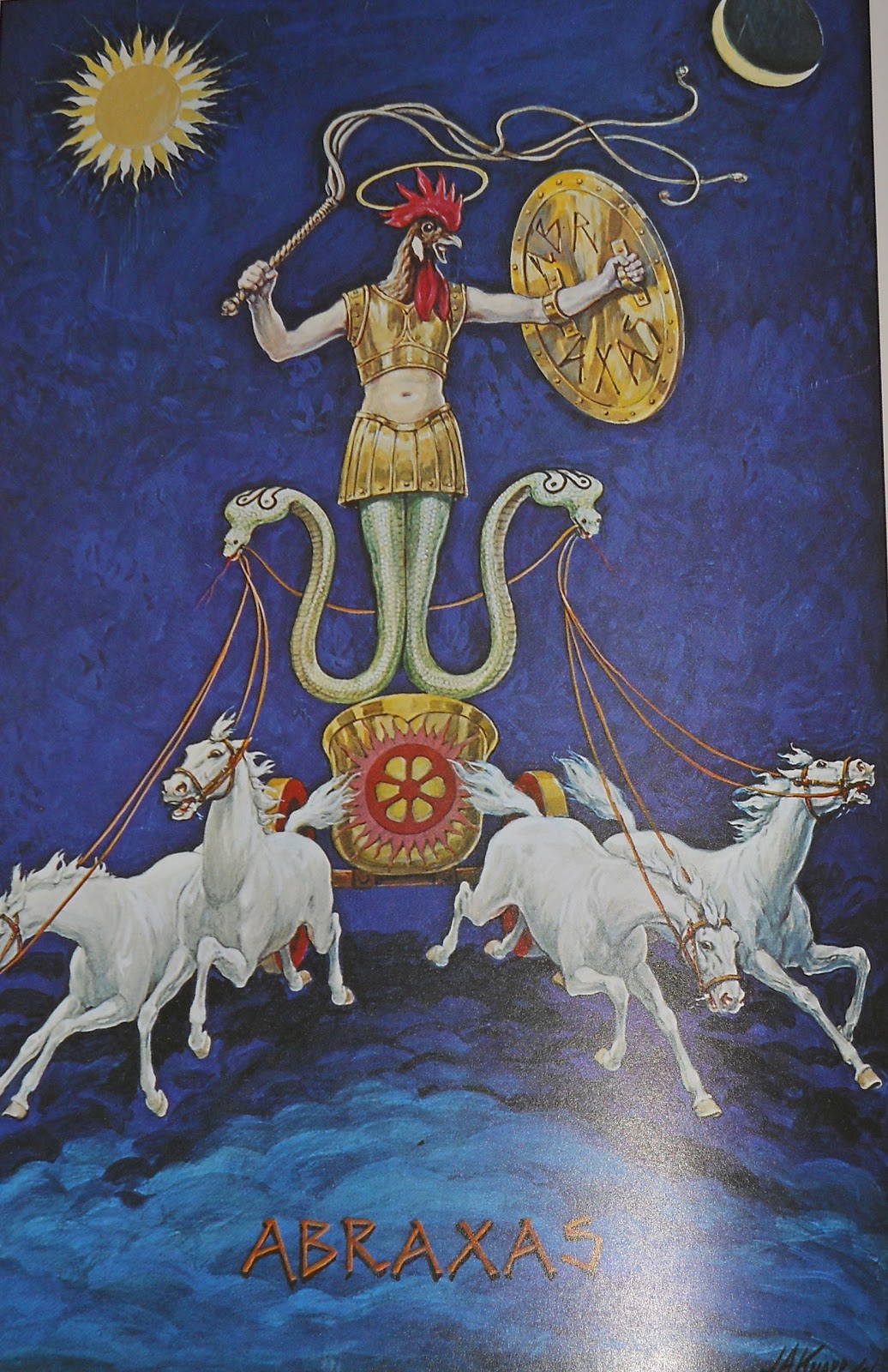 Abraxas—A “ word symbol” consisting of seven letters which signify the creative powers or planetary angels recognized by the ancients. This plate is the enlargement and amplification of a Gnostic jewel, the original being only a trifle over an inch in height. Rings and other articles of jewelry were used by members of the order, a secret society, as means of identification, the designs were small and inconspicuous. In the Greater Holy Assembly it is written of the Ancient of Ancients that He is the Concealed of the Concealed Ones, the Eternal of the Eternal Ones, the Mystery of the Mysteries, and that in his symbols he is knowable and unknowable. He sits upon a throne of flaming light and the white light streaming from His head illumines four hundred thousand worlds. The glory of this light shall be given unto the just, who are called “the sacred fruits of the Tree of the Sephiroth.”

When queen Maya reached the Lumbini garden, she wished to stop there. As she stood holding a bough of a Sala tree, the throes of birth came upon her. The Bodhisattva appeared from the right side of the mother and was received at once by the gods and then by men. He came down from their hands, took seven steps and explained. ‘I am the foremost of all. This is my last birth. I will cross the ocean of existence.”

There is a strange Qabbalistic legend concerning CHiram to the effect that he was a descendant of Samael, the Spirit of Fire, and that among his ancestors was the immortal Tubal-cain, who invented the forge and first tempered metals…the masterpiece of CHiram’s handiwork was the Molten Sea—a magnificent laver of purification, carried by 12 oxen… thirty cubits in circumference. The Madonna who gives birth to the Man Child signifies the priority of the mother aspect of Divinity, the maternal creative function being considered the highest expression of being. The Christ Child symbolizes Wisdom; the Virgin Mother, Faith. The figure declares that Wisdom, born of Faith, shall redeem the world encircled by the serpent of evil.

The cherubim described in Genesis signifies the clouds filled with phantomlike creatures which enveloped the Garden and hid it from view. Cherubim symbolize the fullness of wisdom and are the spiritual guardians of the four rivers of life flowing from the Creator. When the twelve tribes of Israel camped in the wilderness, the banners of Reuben (the man), Judah (the lion), Ephraim (the bull), and Dan (the Eagle) were placed at the four corners.

Consulting The Oracle of Delphi

While the tripod and its base differ from the description of several authors, an attempt has been made to follow as closely as possible the symbolism concealed within the allegory of the oracle. The three legs symbolize the periods of time controlled by Apollo, the past, the present, and the future. So the Delphic Oracle, as the spiritual nature of man, is suspended over the abyss of oblivion by three golden threads of Divine power.

Consummation of the Magnum Opus

The great Rosicrucian, Robert Fludd, declared the universe to be a vast chemical laboratory and the various manifestations of life existing therein to be the result of alchemical processes analogous to evolution… The unfoldment of the Christ within each human soul is the magnum opus that elevates the philosopher to the exalted position of Father R.C., or a Knight of the Golden Stone.

Contents of the Zodiacal Egg

With the signs of the zodiac shown according to the mystic arrangement of Jakob Boehme, the personifications of universal agencies. The four fixed signs of Taurus, Leo, Scorpio, Aquarius, are shown as the arms of a great St. Andrews cross. Upon this cross the Solar Man is annually crucified, and by his death enters the grave of creation, that he may redeem the creatures dwelling within the shell of the world egg. Note: 12 around 7 around 3.

Courtyard of the Tabernacle

As he goes about his daily life, every man—unknown to himself—is a priest of the Tabernacle; each individual is appointed by Jehovah to keep his own little world in order. Nature is the Tabernacle, Man is the priest, and the one God of all nations and all peoples dwells in every human soul behind the veil of the “Holy of Holies.”

This ancient emblem of equilibrium consisted of an androgynous body surmounted by two heads, one male and the other female, wearing a single imperial crown. That being alone is perfect in which all opposites are reconciled, and this state of perfection is appropriately typified by the two heads of equal dignity. Hence the double-headed eagle is reserved as the emblem of completion, for it signifies the Philosopher’s Stone, the ultimate soul condition, and that absolute and transcendent perfection which arises only from the fullest unfoldment of the latent potentialities within the individual.

Amazing book. It has been an excellent resource for my studies. So much information. I believe this is one of those books that just about every should have regardless of their path.

I was lucky enough to find one of the special large format books from the 70's.

It's an awesome reference book to draw enlightenment and inspiration from that may spawn additional paths of knowledge.

This book is high up on my 'To Read' list.