The Hermetic tradition represents a non-Christian lineage of Hellenistic Gnosticism. The tradition and its writings date to at least the first century B.C.E., and the texts we possess were all written prior to the second century C.E. The surviving writings of the tradition, known as the Corpus Hermeticum (the "Hermetic body of writings") were lost to the Latin West after classical times, but survived in eastern Byzantine libraries. Their rediscovery and translation into Latin during the late-fifteenth century by the Italian Renaissance court of Cosimo de Medici, provided a seminal force in the development of Renaissance thought and culture. These eighteen tracts of the Corpus Hermeticum, along with the Perfect Sermon (also called the Asclepius), are the foundational documents of the Hermetic tradition.

The texts presented here, below, are taken from the translation of G.R.S. Mead,

Though written over a century ago, Mead's Thrice Greatest Hermes provides an excellent compendium and reference to the Hermetic literature. His commentary on the texts is unequalled. However for a modern reader there is a problem with Mead's translations: he translates using an outmoded and pompous-sounding Victorian English. But then, it must be understood the original Greek texts of the surviving Hermetic literature have a rather outmoded and pompose tone, and their Greek syntax is often obscure.

With his choice of language, Mead tries to convey both the ambiguity and the the elevated, visionary intensity of the material. He correctly understood the Hermetic writings as the distillations of profound spiritual and psychological experiences -- experiences the texts themselves call "Gnosis". These are not philosophical tracts. Their core impetus was communication of a visionary reality. The tradition that produced the Corpus Hermeticum embrased an imaginative, prophetic voice common in Gnostic scriptures; and the insights this "Gnosis" produced are not easily expresssed in Greek, or Latin, or any pedestrian dialect of English. But they can by understood, if one has an ear for the core experience. It is the desire to communicate their experience of interior reality that motivated these ancient authors.

For a more easily readable (and very reliable) modern print edition, we recommend the respected 1995 translation of the Hermetica by Brian P. Copenhaver, Hermetica: The Greek Corpus Hermeticum and the Latin Asclepius in a New English Translation. 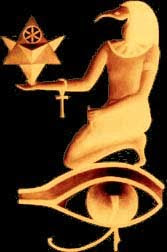 What is the Hermetic tradition, and what did it teach?

To answer those common questions, we offer the following introductory resources: These are the opening words of the Poemandres, the first text of the Corpus Hermeticum; they provide a first insight into the visionary source of Hermetic Gnosis:

Upon a time while my mind was meditating on the things that are, my thought was raised to a great height, while the physical senses of my body were held back—just as are the senses of men who are heavy with sleep after a large meal, or from fatigue of body.

I thought I heard a Being more than vast—in size beyond all bounds—called out my name and say: "What wouldst thou hear and see, and what hast thou in mind to learn and know?"

He answered: "I am Shepherd of Men, Mind of all-Masterhood; I know what thou desirest and I am with thee everywhere."

And I replied: "I long to learn the things that are, and comprehend their nature, and know God. This (I said) is what I desire to hear."

He answered me: "Hold in thy mind all thou wouldst know, and I will teach thee."

And with these words His aspect changed; and straightway, in the twinkling of an eye, all things were opened to me. And I saw a limitless Vision: all things turned into Light—sweet, joyous Light. And I became transported as I gazed.... The Corpus Hermeticum are the core documents of the Hermetic tradition. Dating from early in the Christian era, they were mistakenly dated to a much earlier period by Church officials (and everyone else) up until the 15th century. Because of this, they were allowed to survive and we seen as an early precursor to what was to be Christianity. We know today that they were, in fact, from the early Christian era, and came out of the turbulent religious seas of Hellenic Egypt.

These are all taken from Mead's translations, which are in the public domain at this point.

An Introduction to the Corpus Hermeticum
I. Poemandres, the Shepherd of Men
II. To Asclepius
III. The Sacred Sermon
IV. The Cup or Monad
V. Though Unmanifest God Is Most Manifest
VI. In God Alone Is Good And Elsewhere Nowhere
VII. The Greatest Ill Among Men is Ignorance of God
VIII. That No One of Existing Things doth Perish,
but Men in Error Speak of Their Changes as Destructions and as Deaths
IX. On Thought and Sense
X. The Key
XI. Mind Unto Hermes
XII. About the Common Mind
XIII. The Secret Sermon on the Mountain

However, there is an earlier Translation by John Everard, 1650 which led to this discussion