Hi everyone, thanks for being here today. I decided to host this study group in order to shine light on the form of mysticism known as Kabbalah, Cabala, Qabala, etc.

Let us study the Kabbalah by supplying answers to questions, and, hopefully, questions to answer. I will paste full responses to my questions, and if you wish, please share your answers as well.
First off, let us start with our initial impressions.

What is the Kabbalah? [Please describe your ideas of what Kabbalah is].

It is very difficult to describe the Kabbalah in one sentence. It is an operating system, a program, a map, for both the rational, wordy left brain and the chaotic, creative right brain. It is personal for everyone.

It is a mystical philosophy that explains the process of universal creation which connects the highest realms to the lowest, right down to life here on Earth.

Kabbalah is a philosophical, symbolic, and geometrical system that describes the creation and operation of the universe through four dimensions by employing a schematic design containing 10 spheres of descending emanations connected by 22 paths attributed to the letters of the alphabet and their numerical equivalents.

Kabbalah is also a system of magic which can be used for the invocation of angels, demons, spirits, etc. , as well as divination methods like tarot.

Many people know the Kabbalah through its diagrammatic representation known as the Tree of Life. Please familiarize yourself with the following images - they are the oldest representations of the tree of life that we have. This second image is a Tree of Life published in the 17th c. by the Jesuit priest Athanasius Kircher. Notice that the "paths" or "lines" which connect the spheres are different between these two pictures. There is meaning and reason to this, which I will discuss at a later point.

As this is the "first study group" , I would like to first go through some history of Kabbalah and then we can get into the real study.

Where did it originate?

Legend says that Moses received it as the Key to the Torah. The word “Kabbalah” means “to receive”. The Golden Dawn and other organizations believe it was given to Adam by God, and that it is a truly universal pattern of creation.

Factual evidence supports that it may have originated in Alexandria, Egypt. Founded by Alexander the Great in 331 BC, the richness of culture, interaction, literacy and religious passion emanating from Alexandria and Upper Egypt had an extraordinary influence on Western culture.

One particular manifestation was a Graeco-Egyptian synthesis of belief, practices, and culture expressed in a literary form now known as Hermetica, named after the quasi-divine personage and teacher, Hermes the Thrice Great, a fusion of the Greek god Hermes with the Egyptian god Thoth.

Kabbalah was likely invented around the same time as Hermeticism and Gnosticism, as many parallels are shared. The first distinct Jewish mystical movement emerged around this time frame, it was a pre-Kabbalistic philosophy focused on Visions of the Merkavah/Merkabah (The Divine Chariot).

In addition, the influence of Pythagoras, Plato, and their neo-counterpart philosophies also supported and enriched the Kabbalistic vision. The study of Kabbalah continues its evolution to this very day, having passed through the Alchemists, Rosicrucians, Freemasons and other mystics. Kabbalah is ancient.

Check out this picture for a flow chart of the evolution of Kabbalah. The first official Kabbalistic publication is the Sepher Yetzirah ("Book of Formation") which is believed to have been printed in 300 AD. The Sepher Yetzirah is a small, highly complex book which relates the letters of the Hebrew alphabet to components of creation. This publication also gives dimensions for the cube of space. (Not Shown)

The next major development was the Sepher Bahir ("Book of the Brightness") , which focused on further elaborating the Tree Design and also affixing Divine Names . Once again, this is an equally old text. Later on, the epic Zohar - a commentary on Kabbalah was produced by Moses de Leon. This was later picked up by Isaac Luria, another evolutionary figure in Kabbalistic thought.

Fast-forwarding to the current day , we find that dozens of new books on understanding the Kabbalah are produced every year. I would now like to state that there is no "one system" of Kaballah - there is only one system, and that is the system which works best for you. This is very important to realize.

As stated before, the ideas of Kabbalah share many parallels with major philosophical movements which have spanned millennia. This is the idea that life, universal creation, is the product of descending emanations which come down through spheres, each time becoming more differentiated or specific, more divergent and complex, until we end up with the physical result.

In this picture, on the left, we have the lightning flash goinng from top to bottom. On the right, we have the way of return, via the method of the "Middle Pillar". Sephirot or Sephiroth, meaning "enumerations", are the 10 attributes/emanations in Kabbalah, through which God (who is referred to as Ein Sof - The Infinite) reveals himself and continuously creates both the physical realm and the chain of higher metaphysical realms (Seder hishtalshelus). The term is alternatively transliterated into English as Sefirot/Sefiroth, singular Sephirah/Sefirah etc.

There is a whole string of words: "levels", "powers", "sides" or "areas", "worlds", "firmaments", "pillars", "lights", "colours", "days", "streams", "garments", "crowns" and others. Each term designates a particular facet of the nature or work of the sephirot."

Alternative configurations of the sephirot are given by different schools in the historical development of Kabbalah, with each articulating different spiritual aspects. The tradition of enumerating 10 is stated in the Sefer Yetzirah, "Ten sephirot of nothingness, ten and not nine, ten and not eleven".

As altogether 11 sephirot are listed across the different schemes, two (Keter and Daat) are seen as unconscious and conscious manifestations of the same principle, conserving the ten categories. Systems of 11 sephirot are sometimes called “the tree before the fall”.

In Kabbalah the functional structure of the sephirot in channelling Divine creative life force, and revealing the unknowable Divine essence to Creation is described. As God's attributes to allow Creation to know him, the first sephirah describes the Divine Will above intellect. This describes the act of reflection.

Kabbalah sees the human soul as mirroring the Divine (after Genesis 1:27, "God created man in His own image, in the image of God He created him, male and female He created them"), and more widely, all creations as reflections of their life source in the sephirot.

Therefore, the sephirot also describe the spiritual life of man, and constitute the conceptual paradigm in Kabbalah for understanding everything. This relationship between the soul of man and the Divine, gives Kabbalah one of its two central metaphors in describing Divinity, alongside the other Ohr (light) metaphor. This is the Divine-knowledge/Self-knowledge paradox.

Akin to the pictographic, symbolic imagery of Alchemy I believe that very much can be learned from the art of Kabbalah alone. Kabballistic diagrams are the way that I learn best.

The tree of life is related to many things on many levels. Sephirah and the paths can be attributed to planets, bodily functions, tarot cards, or spiritual entities.

A chart with lots of correspondances.. Relating to the physical body..

Relating to the various levels of consciousness.. The "Three Pillars" Approach.. BALANCE between MERCY and SEVERITY... 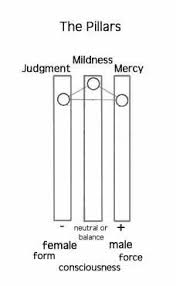 Showing the various permutations/representations of kabbalah, from the denudata.. Malkut is the Kingdom of the physical.
Consciousness at this level is limited to physical existence and physical sensation. Little occurs that could be called self aware thought. Reflex, instinct and undigested memory of physical events are the highest qualities of Malkut consciousness. This is the mental state of one who thinks only of living from moment to moment. There is no True emotion here and no true reason, only the mechanics of existence on earth. A purposeless life is lived by nearly unconscious beings. The Hades of Greek and Roman legend is the lowest level of existence, the level of spiritless, soulless shells. Malkut is Hades unless it is joined to higher states of consciousness.

Keter is the Crown of unity.
A great and lidless eye is all there is. The pupil is white, not black. The iris is gray. The outer orb is black, not white. About the eye are all colors of the rainbow in concentric circles. This is the eye that sees all. The eyes of the earth are eyes of destruction. When an earthly eye gazes, it sees what is outside and grants the power to change the world. The eye of Keter sees the world into existence. Before this eye looks, Nothing exists. The black eye of the world is a camera that takes in what it sees. The white eye beyond the world is a projector that produces what it sees. Earthly eyes are forever changing one vision for another, but this eye of creation sees all places, times, and directions as one. Keter is unity beyond even the questions of difference. Consciousness of Keter is consciousness of total unity.

please see the following album for more trees of life

I add my thoughts to the end that: Kabblah helps you to search for the answer to 'Who you truly are'; What is your purpose on Earth?; Lifts you up (with work) to know the answers and use this 'Knowing'.