Paganism, part 1: what is modern paganism? 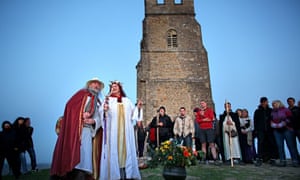 Rollo Maughfling, (left) the archdruid of Glastonbury and Stonehenge conducts a May Day dawn celebration service in front of St Michael's Tower on Glastonbury Tor on 1 May, 2013. Photograph: Matt Cardy/Getty Images

According to the recent census, there are around 80,000 people who call themselves pagans in England and Wales today. Although they are insignificant numerically, they haunt the imagination, earn public fascination and derision in equal measure, and have featured heavily in the recent press – an article on Hellenic paganism at the BBC, one on Anglican attempts to recruit pagans in the Telegraph, and on the future of Stonehenge everywhere. As I write this, the Association of Catholic Priests is bemoaning the apparent fact that Ireland is now a "pagan" country, which might come as a bit of a shock to their parishioners. To quote the Princess Bride: "You keep using that word. I do not think it means what you think it means."

So what does "pagan" mean now? Who are we? What do we believe? And how can we possibly believe it?

I need to emphasise straight away that modern paganism – at least in the UK – has no direct links with whatever it was that ancient pagans, whoever they were, believed in. The term comes from the late Latin "paganus", which simply means "country dweller" or, less flatteringly to the modern mind, "peasant". Most country dwellers today obviously are not worshippers of Hera or Horus, and the name has emerged over the last 100 years or so as an umbrella term to cover a multitude of practices and beliefs – plus many believers who are waking up to the fact that they have very little in common with one another – and certainly not with any ancient practice. We don't know what the original druids did, except through Roman writing of questionable accuracy, and although the presence of cunning men and women is by contrast relatively well documented from medieval times onwards, the set of folk magic practices, and more sophisticated grimoire-based magic, remains firmly rooted within the Christian tradition and is unlikely to reflect any earlier worship except in a very tenuous form.

Modern paganism's roots are in part embedded in the late 19th century, with the rise of organisations such as the Golden Dawn – a society which involved a set of highly theatrical, and more than somewhat turgid, magical practices, and which was heavily patronised by luminaries like George Bernard Shaw and WB Yeats. Its more sensational proponents were people like McGregor Mathers, who fancied himself as a Scottish count, and a young Alistair Crowley. Predictably, the Order disagreed with Crowley and, no doubt fanning itself furiously, booted him out, whereupon he set up his own society, now known as the Ordo Templi Orientis. The pattern of rows, flouncing, schism and petty ideological disagreement – common to all religious orders the world over – has been repeated ever since.

Whatever flavour of practice you care to name, however – wicca, druidry, heathenism, or ceremonial magic – there are some common themes: romanticism, classicism, a harkening to the historical and mythical past, and a focus on the natural world and the passage of the year. The majority of pagans these days do not dwell in the country, but a yearning towards nature is marked: it is fair to say that most have had something to do with the environmental movement, whether this means ordering one's solstice cards from Greenpeace, or hardcore road protests and political activism.

Having been metaphorically beaten over the head by academic historians such as Ronald Hutton and Owen Davies, British pagans are now prone to taking a more measured look at the actual past, as opposed to the mythological one. It is generally accepted that 5 million witches were not burned at the stake (certainly not in the UK, where hanging was more popular), and that wiccan lineages go back to the 1950s, not hundreds of years to where bands of goddess-worshipping priestesses were ousted by evil Christians. That leads us to the question of belief in a historically well-documented, recent attempt to create a religion, and that's one of the questions which we'll be looking at in the weeks to come.

Do modern pagans believe in deity? Some of them do, but not all. Do they perform their rituals outside in nature? Many do, but many occultists wouldn't be seen dead in a grove of trees and prefer to work indoors. Do they undertake political activism? Again, many do – and these sorts of questions are what makes any study of contemporary pagan practices exceptionally broad. We are not a text-based religion, and arguably not a theism or set of theisms per se; modern paganism is diverse, fluid, and individualistic.