This is one book that I fell in love with because of my love of magical alphabets.

(cover image not mine)

Besides the normal cryptograms and secret alphabets of various philosophers, one can find special alphabets for every one of the signs of the zodiac and of the seven planets, and much, much more. This is a brand new translation, with all the nuances and hints, and illustrations by yours truely.

This work of his, Kitab Shawq al-Mustaham, was translated and published in 1806 by Joseph Hammer as
Ancient Alphabets and Hieroglyphic Characters Explained; with an Account of the Egyptian Priests, their Classes, Initiation, and Sacrifices in the Arabic Language by Ahmad Bin Abubekr Bin Wahishih.


I'll take one alphabet  to show you the differences. This is one of my all time favourite alphabets in the book, called the Alphabet of Colphotorios.
A short extract from the old edition, page 7:

Section XIII. The alphabet of Colphotorios
the philosopher. He was deeply learned in the
knowledge of spirits and cabalistic spells, in
talismans, astrological aspects, and in the magic
and black art. Philosophers and learned men
have used this alphabet in their books and writings
in preference to others, on account of it's different
extraordinary qualities.

This is the alphabet, as featured on page 35 of the original Arabic book: 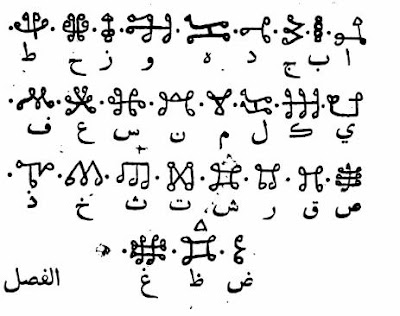 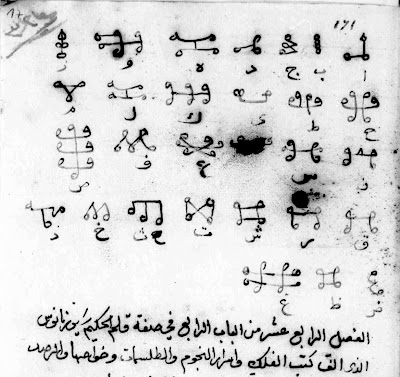 This is my own rendition, no Arabic letters, done in strip format to be more easily edited:

Letters A through Y

Now, if it further happens that additional research is able to identify the culture of the people who lived in that city that's now underwater. If it turns out they are a Vedic people - which I think is quite probable given the location of this off the coast of India - I think that would radically change the whole picture of Indian history which has basically been written by western archaeologists.

The most archaic Sanskrit (Devanagari) is that of the Vedas, multiple books written in thousands
of hymns and verses arranged in song cycles. The Vedas say that "God-men" brought Sanskrit to
Earth men as a language of musical tones. Above on the left is a comparison of the numerals 1 through 10
in Devanagari Sanskrit compared to Arabic. On the right are some examples of Devanagari vowels
and diphthongs. Sources: The New Encyclopaedia Britannica, 15th Edition © 1993
and Sanskrit Keys to the Wisdom Religion © 1968 by Judith Tyberg.

12. The Mystery of the Sacred Proto-Bulgarian Number - the Number Seven

Everywhere, where the Proto-Bulgarians had left something about the celestial bodies, appears the symbol designating the number seven. Even more remarkable is that the character itself resembles a star. Was it a coincidence?

In the earlier Sumero-Accadian writings quite frequently appears a hieroglyphic in the form of a star. It occurs particularly frequently in drawings representing the kings of Sumer and it was a symbol of the king bestowed by the power of the heavens. This star accompanied also the representations of the Assyro-Babylonian kings and it had seven rays - the same number as the number of the known at that time stars and continents. The same symbol was later used by the Sassanid kings. Its sound value is unknown but it can be assumed that in the early times, when it fulfilled the role of a hieroglyphic, it was connected with any single sound or with a whole word - most likely with the word for star. The Sumerians called the stars SHUM which led to words as SHEN (bright), SHUB (holy), etc. It can be assumed that that star shaped character was expressed by SHUN or a sound of the type SH.

A series of  Bulgarian kings were likewise depicted with stars around their face, the tradition was particularly characteristic for the earliest period of the Bulgarian state. The best example is a stamp of Tervel, where next to the face of the ruler are seen two star shaped symbols (see V. Beshevliev, Op. cit., Supplement). After all evidence about the relations of the Proto-Bulgarians to the ancient civilizations of the Near and Middle East, this fact comes to no surprise. The star-shaped symbols seen next to the head of Tervel are identical to the stars from Murfatlar.

Let's return to one of the most mysterious Proto-Bulgarian relicts - the  bronze rosette from Pliska. This star shaped rosette contains fourteen characters - two characters on each of its seven rays (see Figure 4), and its rear side has the combination JUI. The rosette impresses by it fine workmanship - it was cast in bronze, unlike the other, often carelessly scratched amulets.

On one ray we one can read clearly the word SAN, since the characters are familiar to us from the inscriptions from Caucasus and from Murfatlar. Another ray has the word BJA (or BE), the next one  - HJA (or HE), followed by IO, NON, KHE, and the last one - SHR (or SHAR).

The form of the rosette is most important for the interpretations of the words. The seven rays, each one containing a special word, point to the conception of the seven celestial bodies. Indeed, the close examination of the words of the rosette show that they resemble the names of the stars in the ancient languages. Thus, for example, the word SAN reminds of the Accadian name for the moon SIN, which was transferred under the form SHANA in Sanskrit. UO resembles the name of Jupiter from the other Proto-Bulgarian inscription, NON - the Sumerian names of Venus NANA, etc. The table below lists all words of the rosette and the correspondent astronomical terms:

All words of the rosette correspond to the names of the celestial bodies, used by the Sumero-Accadian and Assyro-Babylonian group of peoples. The shorter names of stars were rendered correctly while the longer ones were abbreviated, but the first two letters of their names were always given .

Another point of interest is that the stars were ordered according the astronomical system of the ancient peoples. The so-called harmonious system of the arrangement of the celestials bodies puts the Sun on first place, followed by the moon and the remaining five planets - Mars, Mercury, Jupiter, Venus and Saturn. This harmonious arrangement later led to the Roman and other European names of days of the week - for the French, for example - Dimanach, Lundi (literally - the day of the moon), Mardi (the day of Mars), etc.

The rosette of Pliska points to the direct relationship out of our ancestors to the the founders of the Middle East civilizations. It was usual in the antiquity to abbreviate the names of the planets, these abbreviation, sometimes even to a single character, produced their later symbols.

In the antiquity articles as this rosette contained sometimes an additional message, hidden in the ordering. The additional information was encoded by a careful selection of the abbreviations of the words used. The three special characters on the rear side of our rosette suggest they were made not only to refer to the names of the seven celestial bodies, but for another reason as well. These three characters (so typical for our Proto-Bulgarian monuments that a number of scholars interpreted them as the coat of arms of the ruling clan DOULO) point that the rosette had a particular owner after whose desire it was probably made.

Let us read clockwise the words on the seven rays, starting with Jupiter. Jupiter is selected as a starting point because it enjoyed the special respect of the Proto-Bulgarians and because it played a particularly important role in their pantheon - it was regarded as the master of time, a divinity which holds in its hands the thread connecting the past with the future. The expression we obtains is: UONONKHE SHAR SANBEHE. The text was divided in three words along that particularly characteristic to the Sumero-Accadian and Assyro-Babylonian milieu word SHAR.

SHAR had many meanings in the ancient cultures of the Near East, it meant both celestial bodies and master. UONONKCHE, which can be also read as VONONTE, was the name of a number of historical personalities - for example the Parphian king Vonones, its successor Vonones, the second name or more exactly - the title of the conqueror of Bactria - the Kushan ruler Kanishka, called Uanando Bagolago. All names stem from the epithet Vanand ('victorious, presented with the grace of the Gods'), which is of very ancient origin with roots in the Sumero-Accadian and from there in the Sanskrit culture. Since the eastern Iranian languages replaced "o" with "a" (which is also characteristic to the modern Mundjan and Tadjik languages), in Old Parphian this epithet was pronounced as VONONES, while for the Kushans - as UANAND. Even more interesting is that we find that ancient name also the Proto-Bulgarian context - the Proto-Bulgarian ruler VANAND, who according to Armenian sources lived at times of the Armenian king Arshak in the valleys of Caucasus. Upheavals there made him, together with his people, migrate to Armenia. He settled in Armenia not later than 350-360 AD (or even earlier), but besides some brief notes in Armenian sources there are not other historical data. The Armenian sources call him Vanand and Vund, which suggests that he possibly carried a name of the type of Vonont.

The rosette, carrying the name and the title of one of the first Proto-Bulgarian princes - Vanant, is a particularly important historical source, as other sources hardly exist. The title SHAR of that prince much resembles the Pamirian title CHAR, and the title CAR, assumed at the Bulgarian court in the time of Simeon.

Magnificent find! I love discovering ancient alphabets, there is so much more to everything that we are traditionally taught nowadays or have normal access to.

yes indeed, me as well

Is this in the library?

nope i got it from google. all the links are included in the post,

google is me friend hehehe

google is my friend as well. i am a googler