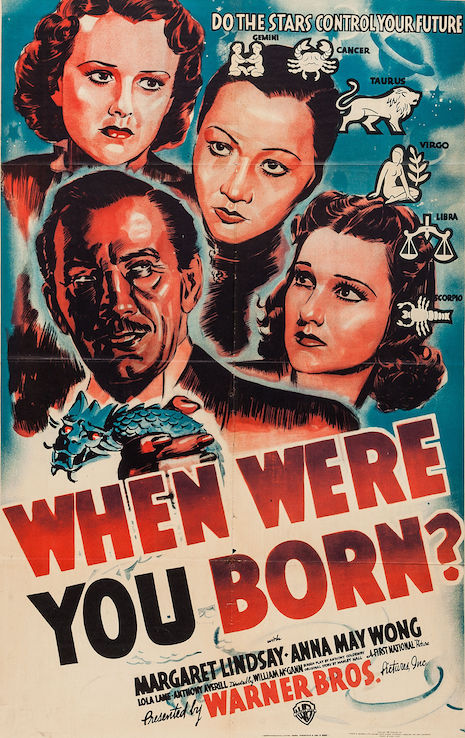 One of Elvis Presley's favorite books, The Secret Teachings of All Ages, was the work of Manly Palmer Hall, a Los Angeles-based esotericist who tried to break into the moving picture business long before Elvis did. In 1938, Hall appeared in an astrological murder mystery based on a story he sold Warner Bros., When Were You Born?

Anna May Wong plays Mei Lei Ming, a Chinese astrologer who uses her total omniscience to help the San Francisco police solve a crime. Each of the movie’s 12 characters has a different sun sign—awfully convenient for the plot, but an ingenious way of teaching the zodiac to an audience nonetheless. Hall defended the movie as “the first picture ever made by a major motion picture studio of the world dealing with the subject of astrology except as a joke or fraud.”

Master of the Mysteries: New Revelations on the Life of Manly Palme... says the original version of Hall’s story “depicted astrologer Evangeline Adams as a ‘kind, old lady’ who happened to be a powerful influence on the stock exchange,” but the studio had other ideas:

The plot would be more saleable as a murder mystery, [the powers-that-be] said, and more believable with a mysterious and sultry female lead. Hall grudgingly agreed, and came back with a revised version that became the only one of his original stories that was ever actually produced[...]

[The script] called for a pet marmoset, but since the only marmoset available had already been rented out, Hall compromised on a little brown monkey named Venus.

Hall consulted the stars for the best starting date and time: exactly 11:26 a.m. Feb. 9. It was reported that he must have gotten his stars mixed up because leading lady Wong was in bed with a cold that day. Hall insisted that although the studio had lived up to the letter of his starting time, it had not observed it in spirit. Director William McGann had shot the first scene at the prescribed moment, Hall agreed, but he had spent an hour or more rehearsing his cast before that. He complained that only one actor in the film was actually born under the character he played—in his case, Pisces, the fish.

As a final touch, it was decided that the movie should open with Hall making an introductory on-camera speech explaining how astrology can forecast future events and, as he says, solve crime. Hall lamented having to do the scene, calling his cameo appearance a final blow to the project that had been tinkered with so much that he barely recognized it as his own. But the movie’s producers felt it was needed to help the public understand what the movie was all about.

You're welcome Steve. Glad you enjoyed it.

thanks for sharing this cool piece of history